2 Parks in 2 Days and Fireworks too?

I completely understand more and more what it is to relive your childhood when you have kids. This was the first time Adrian went on a swing in the park, and it’s almost my first time too! or at least it felt like it! I got home earlier than usual on Tuesday and since Wednesday was a Holiday (4th of July/USA Independence Day-for those who don’t live here), I felt with more energy than an usual Tuesday night, plus, its summer and the days are so long (it was 6:30pm and the sun was still shining). So Adrian and I went to the park, I was quietly dying to put him in a swing for the first time in a park because he seems big enough. So we did. I think if you see the pictures you will be able to tell if Adrian liked it?? We also spent some time on the grass reading and playing 🙂 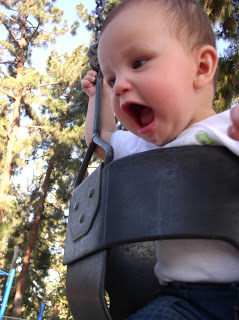 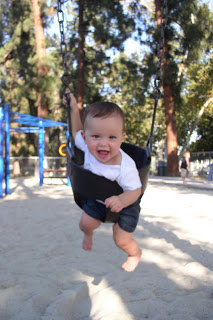 Well, he was probably confused these two days because yesterday Derek and me took him to the other park close by and this one is bigger and has more little ones area, so we not only did the swing but the subi baja (seesaw), a little tobogán (slide) and we rode a little caballito (horsey). Oh my! This is really getting fun now! I didn’t realize how cool the parks are now a days, this is going to be so much fun!! Later on we saw fireworks which I don’t even have one picture of but what I really wanted a picture of was of Adrian’s face and hands expression when he saw them. He was excited and amazed, he kept quiet all the time they where on and watched them calmly, everybody had fun watching him too. By the way, we just stayed at home and went to the roof to watch the fireworks show that the CBS studios offer, prime seats!!! 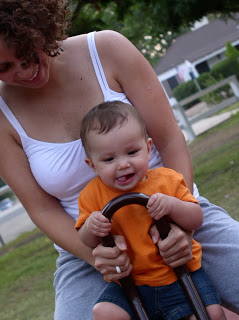